Samuel came home for the weekend after his first month away at Ball State University. He is loving college life so far and we are grateful.

Samuel has been doing some physical training with ROTC there in Muncie and he has discovered the joy of running, so we hit the people trail together this morning - after I got some coffee in me. 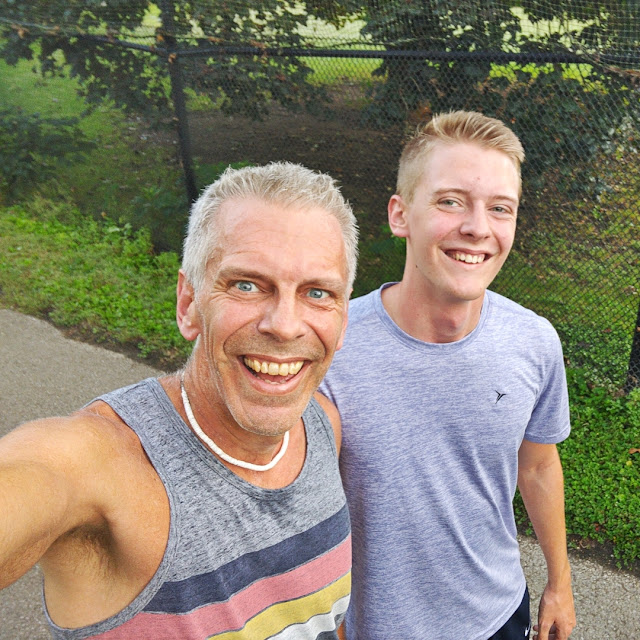 Samuel let me set the pace and we didn't break any records, but it wasn't terrible considering we were talking as we went. (Not to mention the fact that I am just a few weeks past Covid recovery.)

It may be a couple of years now since I ran three miles during one outing, but I did it today.

And I don't remember the last time I ran two miles consecutively without at least a bit of walking in between, but I did that today as well.

I was struck by what I could accomplish - and how much longer I could persevere - just by having someone running beside me each step of the way.

It left me thinking tonight ...

One of the things I truly miss about our life in Haiti is working alongside Melissa on a daily basis, doing work that was important and that we both believed in. Now I head off to my job and she heads off to hers and then we catch up on each other's lives over dinner or as we walk the dogs.

It's not the same.

And it's not as good.

Running alone is just not as enjoyable or productive.

"Two are better than one, because they have a good return

for their work." Ecclesiastes 4:9

Posted by The Gross Family at 11:43 PM No comments:

Don Lemon on CNN recently gave a great (terrible) example of how not to persuade the hold outs who have yet to get the Covid vaccine.

On air he bemoaned those (like me) who say, "Oh, you can't shame them, you can't call them stupid."

His response was "Yes, they are." And "The people who are not getting vaccines, who are believing the lies on the internet instead of science - it's time to start shaming them. What else? Or leave them behind."

(It was not clear to me what Lemon meant by "leave them behind".)

Lemon's co-worker, Chris Cuomo, eventually chimed in: "You're going to question the vaccine but you're going to take a horse de-wormer?"

It's a classic bad faith debate move to demonize your opponent. Sure it appeals to the self-righteous streak of the people on your side, but it does not persuade. It only creates more animosity.

Yet this is how America argues these days.

This kind of stuff is cultural poison.

Posted by The Gross Family at 11:23 PM No comments:

Another helpful debate suggestion if you truly hope to persuade your opponent: acknowledge where they might be right. Acknowledge their fears, their perspective, and their reasons. Find some common ground.

When I teach my 8th graders how to write a persuasive essay next semester, they will be required to research and acknowledge their opponents' strongest arguments. In the opening paragraph.

It's prescribed way to start a debate.

But I have seen almost none of this in the Covid wars.

Why does everything have to be painted a stark black or white?

For the sake of everyone's sanity, let's all strive to take one little step toward the other side in the midst of these "debates".
Posted by The Gross Family at 9:45 PM No comments:

I am a conscientious objector in the recent Covid vaccine wars. So I am just making this observation from a spectator's perspective: the pro-vax folks are doing a terrible job of talking the unvaccinated into taking "the jab".

If you hope to persuade someone to your way of thinking, here's some great advice: Don't insult them.

Why on earth are so many would-be influencers referring to those who are reluctant to get the vaccine as "anti-vaxxers"?

First of all, that term is already established and it conjures images of conspiracy theorist crackpots who reject all vaccines. Thus, the term drips with disdain and ridicule. And the application of this term to present circumstances is inaccurate - these people are not against vaccines in general.

Secondly, "anti-vaxxer" cements the notion that there's no hope they will ever actually change their minds. People who are "anti"-anything already have their minds made up. Why, then, argue with them? How far will that get you?

So here's a suggestion for those, including the U.S. government, who say they want to convince the holdouts to get the vaccine: revise your label. Stop insulting the people you hope to influence.

Either one is much kinder and more accurate. And either holds within itself the hope of a change of mind.

Posted by The Gross Family at 10:27 PM No comments:

The charge of "hypocrite!" in any debate is a type of ad hominem attack - that is, simply insulting an opponent personally instead of addressing the issue at hand.

The beauty (or foolishness) of the hypocrisy charge is this: With it I can distract the gathered crowd with my cries of "hypocrite!" and never touch the question of whether my opponent was correct in the past ... or is correct now.

It had to be one or the other, though, right?

Posted by The Gross Family at 10:36 PM No comments:

I am always fascinated when people lob the accusation of "Hypocrisy!" in political disagreements. It's put forward with such confident self-righteousness, but it's always a losing argument. That's because "My political enemy used to say X, but now they say Y!" can so easily be flipped on its head.

(And the person making the hypocrisy argument simply doesn't see it. THAT is what is fascinating.)

Here's a great example posted by a friend on Facebook recently: 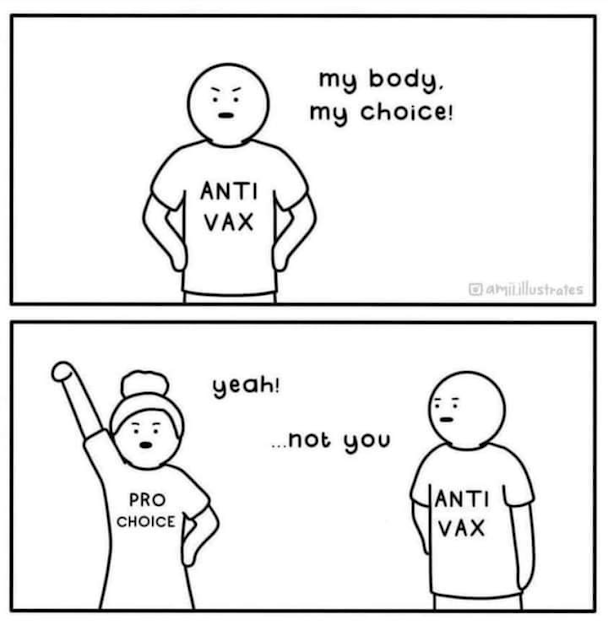 The message is pretty straightforward: "Those anti-vaxers are now using the 'my body, my choice' argument that they always opposed when it came to abortion!"
The hypocrites!
But look how easy it is to swing the hypocrisy allegation the opposite direction. My version offers the same issue with a different hypocrite: 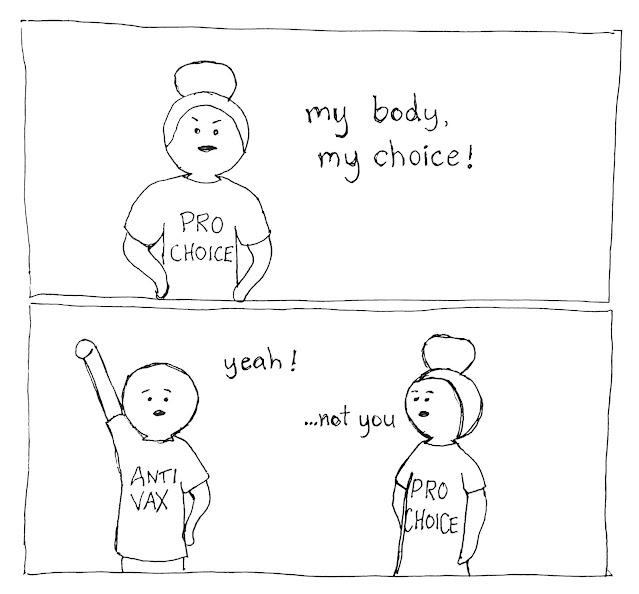 See? Easy as pie.
Now who's the hypocrite? (See answer below.)
(Everybody. We're all hypocrites.)

Posted by The Gross Family at 10:50 PM No comments:

WHAT SEPTEMBER 11 WILL ALWAYS MEAN TO ME

For 68 years before the World Trade Center towers collapsed in flames, September 11th meant something very different to my family. It meant the day my dad entered this world.

I can't picture my dad as a baby, or as a child, or as a teenager. Or even as a soldier. In my imagination he can only be a tall, soft-spoken businessman, loving husband of Carla Beth, and father to Ryan, Spencer, Steven and Russell.

I have no idea how old Dad is in this photo my brother Russ posted on Facebook yesterday, but it has never quite seemed to be Dad to me. 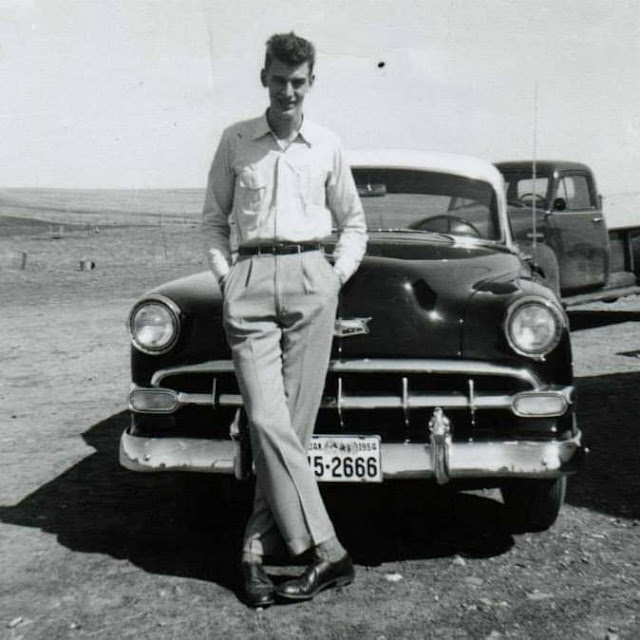 I guess because Mom's not in the photo. And the photo doesn't show Dad walking the floors of the True Value. And he's not in front of a grill or pushing a lawn mower. Or floating on a boat with a rod and reel in hand. He's not sitting at the head of the family dinner table or a bleacher bench for my brother's basketball games. Or in a pew in church.
For nearly twenty years now there have been no new photos of Dad. He passed away in May of 2002.
Yes, September 11, 2001 was his final birthday this side of heaven. But we didn't know that, of course.
A small tragedy for our family in the midst of the bigger national tragedies of that day.

Posted by The Gross Family at 4:00 PM No comments: